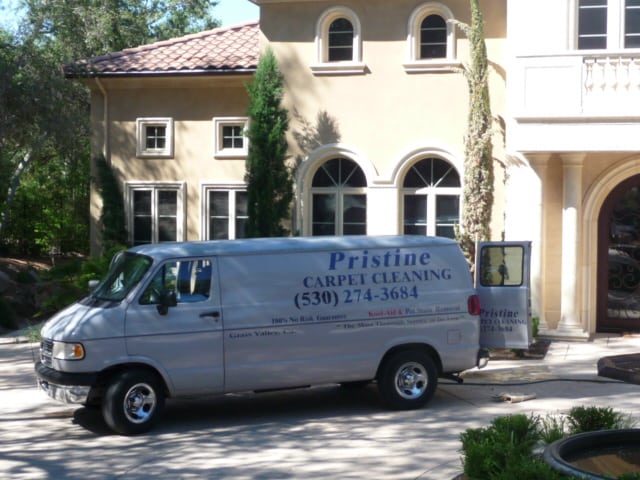 "Our Passion is Service"

As we clean carpets in Grass Valley, we often run into pet urine issues, which are some of the toughest situations to remedy. Often pet urine isn’t noticed until later, so no blotting was done at the time that the urine was in an acid state. Now, as it decomposes, it becomes a strong alkaline, and ammonia has formed.

This creates an alkaline salt, and removing this salt is an important first step in removing more difficult stains.

An acid neutralizer may be used by the technician to neutralize the salt, allowing it to be dissolved quickly. Some neutralizers may include a deodorizing ingredient and something to emulsify (the mixing of two liquids such as oil and water) lipids or body fats that are deposited along with the urine.  These lipids tend to resist water. Once they have been removed, any water based cleaning to follow will be more effective.

What has just been described is an option in treating pet urine. The next step is the utilization of oxidizers which when activated with hot water, can be powerful. These products include ingredients such as sodium percarbonate and sodium perborate. They create extra oxygen in the water to form peroxide compounds. The effectiveness of these products comes from removing both the odors of decomposition and rapidly breaking down organic staining material.

A dwell time of 20-30 minutes as recommended by the manufacturer will make the process effective. Sometimes, because of the degree of contamination, the process may need to be repeated. Because such a process reaches into the pad and the subfloor, oxidizing can be a good treatment.

We have just described a second option; oxidizers.  A principal source of urine odor is ammonia and other gases as created in the process of decomposition. Using friendly (non-pathogenic) bacteria designed to swiftly feed on the components of urine can help. These bacteria produce enzymes and can be considered an enzyme factory. They produce the right enzyme to do the task, so with bacteria and the enzymes they produce which digest or break down complex molecules then the urine is broken down and digested.

The fact is that most bacteria is beneficial and not at all harmful. Bacteria is necessary for our digestive system.

"Our Passion is Service"

Call us for an appointment, today!